Chinese media are mostly full of praise for relations with the US, but differences over trade and human rights could come to the fore. 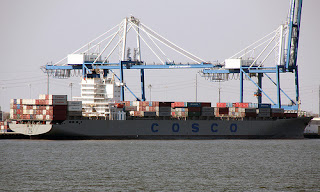 Chinese container ship Cosco Tenghe in South Carolina port (IMAGE - Mr. T in DC)
As Chinese President Hu Jintao began his state visit to the US on 18 January 2011, Chinese official media focused on how important Beijing regards the visit for improving the relationship between the world's leading economic superpowers.
Chinese media praised the continuing growth in bilateral trade between the two countries. They also echoed the theme that Hu's visit was intended to open what they call "a new phase in the development of Sino-US relations".
"Common Interests"
As President Barack Obama hosted a private dinner for President Hu at the White House hours after his arrival, the official Chinese news agency Xinhua (New China News Agency) noted that 2011 marked the 40th anniversary of "the rapprochement between China and the United States".
The agency said in an English-language report on 19 January 2011 that "both leaders positively assessed the progress in bilateral relations, and hoped that the visit will further promote a positive, cooperative and comprehensive Sino-US relationship".
In a reference to the Obama era, Xinhua commented that "with concerted efforts from both sides, the bilateral relations have seen significant progress in the past two years."
"The development of Sino-US relations in the past two years makes it clear that in a globalized world, China, the largest developing country, and the United States, the largest developed country, have tremendous common interests and hold great responsibility of safeguarding world peace and promoting common development. This is the cornerstone of the Sino-US relations in the 21st century," Xinhua concluded.
China Fastest-Growing Market for U.S. Products
Bilateral trade is expected to exceed 380 billion dollars in 2010, and China has been the fastest-growing market for US products for nine years in a row, the Xinhua report said.
US officials, too, acknowledge the importance of the trade and economic relationship with China. US Treasury Secretary Tim Geithner, for example, has described the Chinese market as being "of vital importance" to a continued American economic recovery.
On 17 January 2011 Chinese and US companies signed six business deals worth 574 million dollars in Houston, Texas, to kick off a four-day Beijing trade mission to the US, China's state-run English-language newspaper China Daily reported.
The deals include imports of cotton as well as solar cell development and a photovoltaic system used in power generation.
US "Gains More" From Bilateral Trade
An opinion-piece in the Chinese official Communist Party newspaper People's Daily on 17 January 2011, republished in China Daily, said China was now the second largest trade partner of the US, as well as the fastest growing market for US exports. But the US gained more from bilateral trade with China than vice versa, it argued.
"China has become a profit center for enterprises from the United States. Statistics from the Ministry of Commerce of China indicate that by the end of 2010, US companies had invested 65.22 billion dollars in more than 59,000 projects in China," the article said.
It added that according to the 2010 report of the American Chamber of Commerce in China, 71 per cent of US companies in China made a profit in 2009. For 46 per cent of the companies surveyed, the profits from the Chinese market were higher than their global average.
"China's controversial trade surplus with the US doesn't mean that US interests are harmed… As for the heated debate over the valuation of the yuan, China's surplus in its trade with the US increased considerably from 2005 to 2008, during which the yuan appreciated by 21.2 per cent," the opinion-piece concluded.
"Some Rifts And Frictions"
Another Xinhua commentary, on 17 January 2011, pointed out the areas of contention that still loomed between Beijing and Washington.
"Obviously, the Sino-US relations are also bedevilled by some rifts and frictions, some in economy and trade, while others in sensitive issues touching on sovereignty, security and territorial integrity," the commentary noted.
But with both countries agreeing that "bilateral common interests are far larger than divergence, and cooperation is always the mainstream of bilateral relations," they should deal with their differences "through equal dialogue and negotiations, and intensify risk control", rather than "alienate each other because of differences," Xinhua concluded.
In similar vein, China Daily on 18 January 2011 quoted a senior official at China's Ministry of Commerce as saying that although the US continued to blame China for its massive trade deficit with the country, and had threatened to levy high duties on Chinese imports, frictions over trade could not damage the economic and trade relations between the two countries.
He Ning, director-general of the ministry's department of American and Oceanian affairs, told China Daily that "stable and healthy economic relations could translate into huge benefits for both", and the Chinese government was willing to take steps to make that happen.
Global Times, another English-language state-run Chinese paper intended for an international readership, said in an editorial on 18 January 2011 that China and the US, as the two most powerful countries in the world, should "clarify their relationship".
Recent activities by the US, including "securing military alliances with China's neighboring countries, supporting anti-China political exiles, [and] selling weapons to Taiwan," have "confused the world" as to Washington's true intentions, the Global Times commented.
Meanwhile, China-watchers are also waiting to see when during Hu's four-day visit US officials will raise the thorny issues of internet freedom in China, and the perception by many US companies that Beijing's enforcement of intellectual property rights has deteriorated in the last year.
Posted by Peter Feuilherade at 05:26