South Korea says its troops' killing of Somali hijackers in a Gulf of Aden rescue raid sends a tough message to pirates. 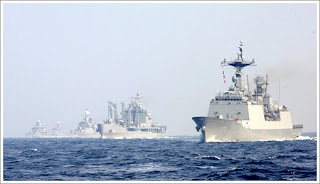 South Korean naval exercises (IMAGE - South Korea Navy)
South Korean navy special forces stormed a hijacked cargo ship in the Arabian Sea on 21 January 2011, rescuing all 21 crew members and killing eight Somali pirates. Five pirates were captured.
The South Korean news agency Yonhap said President Lee Myung-bak had praised the operation in a nationally televised address. It quoted Lee as saying: "Our military carried out the operation perfectly under difficult circumstances. I appreciate it and send a message of encouragement."
The raid took place about 800 miles (1,300 km) off the coast of Somalia, officials in the South Korean capital Seoul said. It was the first such rescue by South Korea since it sent warships to join multinational anti-piracy patrols in the pirate-infested area in 2009.
"Strong Message to Pirates"
The rescued vessel, the 11,500-tonne Samho Jewelry, was carrying chemicals from the United Arab Emirates towards Sri Lanka when it was hijacked in the waters between Oman and India on 15 January 2011, the BBC News website recalled.
Yonhap said the South Korean destroyer Choi Young, with 300 special troops aboard, had first closed in on the Samho Jewelry on 18 January 2011, after its hijackers left the vessel to attack a Mongolian ship nearby.
The agency quoted Lt-Gen Lee Seong-ho, head of combat operations for South Korea's Joint Chiefs of Staff, as saying: "During the operation, our forces killed some Somali pirates and all of the hostages were confirmed alive… This operation demonstrated our government's strong will that we won't tolerate illegal activities by pirates any more."
The timing of the operation was also based on intelligence that a "mother ship" was leaving a Somali port, which the South Korean forces suspected was probably transporting more pirates to the hijacked ship, Yonhap added.
General Lee told reporters that South Korea had received help from other countries, including the US, Bloomberg news agency noted.
The South Korean newspaper The Korea Herald commented on 21 January 2011 that the “successful rescue of Samho Jewelry and its crew sends a strong message to terrorists as well as pirates.” Local news media had called on the government to take “a drastic step” to discourage Somali pirates from targeting Korean-flagged ships, the paper recalled.
Four Ships Hijacked in Aden Gulf in 2011
The Gulf of Aden, between Yemen and Somalia, and the northwestern Arabian Sea are notorious danger zones for attacks by Somali pirates.
The International Chamber of Commerce’s International Maritime Bureau (IMB) said that so far in 2011, there had been 22 incidents involving Somali pirates. As of 18 January 2011, they included four hijackings, in which a total of 86 sailors had been taken hostage.
The IMB recorded 430 attacks worldwide in 2010, up from 406 in 2009.
SEE ALSO:
British Defence Giant Tests Non-Lethal Anti-Pirate Laser
World's Sailors Call for Global Action Against Piracy
Posted by Peter Feuilherade at 05:32