A leading UK scientist says there are no longer valid moral objections to genetically-modified crops, which are vital to prevent global hunger. 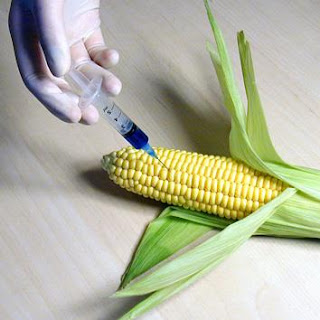 Genetically modified food (IMAGE – Illuminating 9/11)
Genetically-modified crops are vital to prevent a future global hunger crisis, the UK Government's chief scientific adviser Professor Sir John Beddington said on 24 January 2011.
Moves to block cultivation of GM crops in the developing world on ethical or moral grounds could no longer be tolerated, he added.
He was speaking in advance of the publication of his government-commissioned report which warns that urgent action is needed to avert future global hunger on a huge scale, the UK Press Association reported.
"Massive Pressure on Food Production"
The report contains a detailed analysis of the global food situation and was compiled by 400 scientists from 35 countries. It said factors including a growing global population, climate change, scarcity of water and energy were putting massive pressure on food production.
The report concluded that a billion people are hungry, another billion malnourished, and that unless action is taken, there will not be enough food for the growing population.
Climate Change "To Bring New Diseases"
Sir John, who was professor of applied population biology at Imperial College, London, until his appointment as chief scientific adviser in 2008, said on BBC Television's "Breakfast" programme on 24 January 2011 that the world would need 40% more food, 30% more water and 50% more energy by the middle of the century, at a time when climate change would start to have "serious environmental impacts" on the planet.
Climate change would result in spreading drought and a rise in salination, and was likely to bring with it new diseases, and "we need organisms that actually address that," Sir John said.
He added: "If there are genetically modified (GM) organisms that actually solve problems that we can't solve in other ways, and are shown to be safe from a human health point of view, and safe from an environmental point of view, and they can solve problems we can't solve otherwise, then we should use them."
But on BBC Radio's "Today" programme on 24 January 2011, Sir John also noted that GM crops were not the only way forward.
"GM may be the answer for certain problems," he said, such as drought areas, but in general "there is no one simple solution". Issues of waste and under-investment in agriculture also had to be dealt with.
"We are not making any more land, we have got to look for a significant and sustainable intensification of agriculture."
Moral Objections to GM Food "Untenable"
Sir John argued that ethical or moral objections to block cultivation of GM crops in the developing world were not tenable.
It was no longer acceptable to reject GM foods merely on the grounds of "scaremongering", particularly as food prices rocket and the world warms, the Daily Telegraph reported him as saying.
Dr Julian Little, chairman of the UK's Agricultural Biotechnology Council, echoed Sir John's views, The Telegraph added. "The majority of people recognise that crying wolf on this subject without one substantiated health issue is not going to work anymore," Little said.
However, Sandra Bell, a food campaigner with Friends of the Earth, said it was too early to tell whether there were any negative health effects from eating GM food.
"Thirty years of research and development into GM has not delivered the solutions we need in terms of feeding people who are hungry and solving the problems of malnutrition," The Telegraph quoted her as saying.
Food Riots
The Observer newspaper on 23 January 2011 noted that Beddington's warning came in the wake of food riots in North Africa and rising global concern about mounting food prices.
"A number of very important factors are about to change our world… Its population is rising by six million every month and will reach a total of around 9,000 million by 2050. At the same time, it is estimated that by 2030 more than 60% of the population will be living in cities and will no longer be involved in growing crops or raising domestic animals…," The Observer quoted him as saying.
The paper commented that his support for GM crops would "enrage" many environmental groups, who believe it is wrong for the West to impose a technology it has developed on the Third World.
Critics of GM also believe that Third World farmers should not have to depend on foreign companies for the seeds they need for planting.
Beddington's report, "The Future of Food and Farming".
was presented on 24 January 2011 not just to the UK Department of Environment, Food and Rural Affairs (Defra), but also to the Department for International Development, which directs UK foreign aid.
Posted by Peter Feuilherade at 08:52