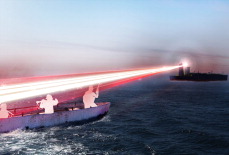 Leading British defence manufacturer BAE Systems has demonstrated a prototype laser device that could serve as an effective non-lethal way to deter pirate attacks on commercial vessels, the company said on 10 January 2011.
Pirate attacks on shipping worldwide are increasing, according to the International Chamber of Commerce’s International Maritime Bureau (IMB), which recorded 430 attacks worldwide in 2010, up from 406 in 2009.
In the Gulf of Aden and the Indian Ocean, pirates remain active despite continuing operations by NATO, the European Union's EUNAVFOR mission, and naval ships from Russia, China, India and South Korea, among others. There are now 28 vessels and 654 hostages being held by pirates off the coast of Somalia, according to EUNAVFOR.
Disorientating But Not Lethal
As pirates increase their range of operations and their capabilities, commercial shipping agents are increasingly looking for ways of preventing attacks while avoiding armed guards on their ships.
BAE said its recently-tested laser was non-lethal and would "leave only temporary effects, to distract and deter potential attackers from a distance".
The laser had been tested at a range near Worcester over a variety of distances in different conditions, in daytime and at night.
"The laser beam is capable of providing a visual warning to pirates at distances greater than 2 km, and of disorientating attackers sufficiently at lesser distances so that weapons cannot be targeted effectively. At all times the power levels of the laser remain eye safe," BAE said.
BAE's Roy Evans explained: "The effect is similar to when a fighter pilot attacks from the direction of the sun. The glare from the laser is intense enough to make it impossible to aim weapons like AK-47s or RPGs, but doesn’t have a permanent effect [on the eyes]." But he added that there were many more requirements to meet before a non-lethal laser weapon could be fitted on commercial ships.
Pirates Said Using More "Mother Ships" 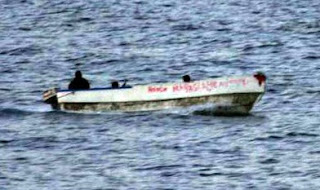 IMAGE - EUNAVFOR
Since international naval forces began intercepting more pirate groups near the coast of Somalia, the pirates have changed their modus operandi, Dutch anti-piracy expert Dr Erik Sluiman told Suite 101 on 7 January 2011. They have switched to the greater use of hijacked vessels as "mother ships", operating further from the mainland to launch attacks.
Sluiman said the vast area of operations in which Somali pirates operated - from the Gulf of Aden to the Somali Basin and deep into the Indian Ocean - limited the ability of anti-piracy forces to track the positions of all pirate "mother ships".
"Naval forces are not capable maintaining surveillance of such a large area, let alone providing protection," he added.
SEE ALSO: World's Sailors Call for Global Action Against Piracy
Posted by Peter Feuilherade at 02:40