A report by engineers from around the world says technology could hold the answer to problems posed by population growth. 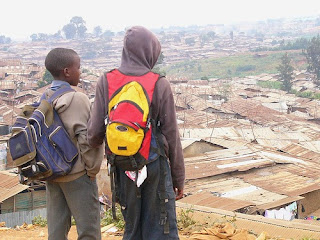 Kenya's biggest slum - Kibera in Nairobi (IMAGE – Tom Maruko)
The UK-based Institution of Mechanical Engineers (IMechE) warned in a report published on 12 January 2011 that billions of people could face hunger, thirst and slum conditions as the world hurtles towards population overload by the end of the 21st century.
The report, entitled "Population: One planet, too many people?", was compiled with input from more than 70 engineers around the world, and is the first of its kind by the profession.
It warns that the earth’s resources face being swamped as the global population, currently 6.9 billion people, swells by an extra 2.5 billion by the end of this century.
But it says the problems posed by the population explosion could be solved with existing technology, and sets out a series of "engineering development goals".
Mega-Cities and Water Wars
The IMechE report predicts that soaring urbanisation will lead to the number of "mega-cities" of more than 10 million people rising to 29 by 2025, and the planet's urban population increasing from 3.3 billion in 2007 to 6.4 billion in 2050.
Food will also become an increasingly precious commodity. Developed countries such as the UK will be forced to abandon what the Institute calls their "throwaway" lifestyle.
Water consumption will increase by 30% by 2030, and a 50% increase in water extraction for industrial use is forecast in Asia.
This, the report warns, could create civil unrest and land battles for resources as climate change looms.
"Existing Technologies Are The Answer"
The report lists energy, food, water, urbanisation and finance as the five areas which will be significantly affected by the effects of population growth.
Its lead author, Dr Tim Fox, told BBC Radio 4's “Today” programme on 12 January 2011: "The scenario shows that the population will peak at 9.5 billion in 2075,and will reach something like 9 billion in 2050… The challenge of providing food, water, energy and homes internationally can be met through existing technologies that are available today …
"The bulk of population growth through to the end of the century is going to take place in the newly developing nations, at the same time as they are going through the process of industrialising. What the report shows and calls for is for us to transfer this knowledge, technology and expertise to enable them to not make the same mistakes we made."
In remarks published on the IMechE website, Dr Fox said: "Population increase will be the defining challenge of 21st century, a global issue that will affect us all no matter where we live. Britain is in a currently in a prime position where it has, at its fingertips, some of the most groundbreaking engineering solutions in the world – and the brightest and most educated engineers. We need to work right now with the Department for International Development to set up a knowledge ‘swap-shop’ of engineering skills with other countries. This is not altruism. This is self-defence."
"Up to 1 billion people could be displaced by climate change over the next 40 years and we are likely to see an increase in unrest as resource shortages become clear," Fox added.
BBC environment analyst Roger Harrabin commented on the BBC website on 11 January 2011 that the report would be welcomed by some who consider that climate change has assumed too dominant a role in international policy circles.
"But others will criticise the institution for allowing climate change and population to be set against each other in the public debate," Harrabin added.
More "Good News" On Sustainability
Another report on sustainability, mentioned on the New Scientist website on 11 January 2011, said the 9 billion people projected to inhabit the earth by 2050 need not starve in order to preserve the environment.
"Agrimonde describes the findings of a huge five-year modelling exercise by the French national agricultural and development research agencies, INRA and CIRAD…The model suggested that realistic yield increases could feed everyone, even as farms take measures to protect the environment, such as preserving forests or cutting down on the use of fossil fuels. The key will be to tailor detailed solutions to different regions."
New Scientist commented: "It is the second report on sustainability launched this week to provide a healthy dose of good news."
Posted by Peter Feuilherade at 05:13