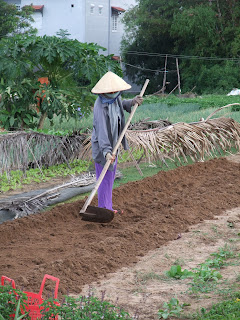 Vietnam village communal farm (IMAGE – Peter Feuilherade)
Agriculture's share of global development aid has fallen to a quarter of what it was 25 years ago, the Washington-based research organization Worldwatch said in a report published on 12 January 2011.
While investment in agricultural development by governments, international lenders and foundations has escalated in recent years, it is still nowhere near what is needed to help the 925 million people who are undernourished, Worldwatch said in its report entitled "State of the World 2011: Innovations that Nourish the Planet".
It found that "since the mid-1980s when agricultural funding was at its height, agriculture's share of global development aid has fallen from over 16 per cent to just 4 per cent today."
Worldwatch warned that with the world population approaching seven billion people, and an increase of up to 40 per cent expected by 2050, governments needed to take "urgent action".
Agriculture "In Trouble"
Worldwatch said there had to be a revolution in investment in food and water to reverse a "frightening" long-term depletion of stocks, the French news agency AFP reported on 12 January 2011.
"Agriculture as we know it today is in trouble," the institute's report added.
Agriculture employed more than one billion people worldwide, but it was the biggest consumer of ever-scarcer water and a huge producer of greenhouse gas emissions.
Although agriculture accounted for one trillion dollars of the global economy, it was also responsible for 70 per cent of water withdrawals and 15 per cent of greenhouse gas emissions, much of that from developing countries.
Worldwatch said small farmers who dominate the industry would be the key to maintaining food supplies for the world's estimated one billion hungry people.
Producing More Food "Not The Answer"
According to Worldwatch, studies have shown that increasing food production is not having an impact in reducing hunger in the world.
"From 1980 to 2009, the production of barley, corn, millet, oats, rice, rye, sorghum and wheat increased by nearly 55 per cent," the report said. But "hunger also increased and countries' food self-sufficiency declined in that same period."
"The international community has been neglecting entire segments of the food system in its efforts to reduce hunger and poverty," said Danielle Nierenberg, co-director of Worldwatch's Nourishing the Planet project. "The solutions won't necessarily come from producing more food, but from changing what children eat in schools, how foods are processed and marketed, and what sorts of food businesses we are investing in."
Developing countries needed investment to make them less dependent on food imports and international markets. They should put more emphasis on small-scale and less intensive farming, the report added.
Serving locally grown crops to schoolchildren, for example, had proved effective in reducing hunger and poverty in many African nations, Worldwatch said.
Moreover, "roughly 40 per cent of the food currently produced worldwide is wasted before it is consumed, creating large opportunities for farmers and households to save both money and resources by reducing this waste," according to Brian Halweil, Nourishing the Planet co-director.
Agricultural Aid to Africa "Minuscule" 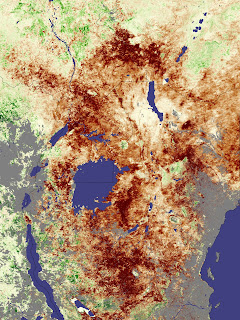 Drought-hit East Africa   (IMAGE – NASA)
Focusing on data for Africa, Worldwatch cited statistics from the Organisation for Economic Cooperation and Development (OECD) showing that in 2008, 1.7 billion dollars were given in official development assistance to support agricultural projects in Africa. It described this as "a minuscule amount given the vital return on investment", and predicted that given the current global economic conditions, investments were not likely to increase in the coming year.
"Much of the more recently pledged funding has yet to be raised, and existing funding is not being targeted efficiently to reach the poor farmers of Africa," Worldwatch's report noted.
Looking at sub-Saharan Africa, where almost 240 million of the world’s 925 million hungry people live, Worldwatch advocated building up soil and water (not just donating seeds for planting), using existing food more effectively, and thinking about the global climate impact of growing food, Reuters news agency reported.
"African farmers could remove 50 billion tons of carbon dioxide from the atmosphere over the next 50 years, primarily by planting trees among crops and stewarding nearby forests," warding off "disastrous climate change," the report said.
The State of the World 2011 report is accompanied by other informational material including briefing documents, summaries, an innovations database, videos, and podcasts, all of which are available at http://www.nourishingtheplanet.org/
Posted by Peter Feuilherade at 06:29