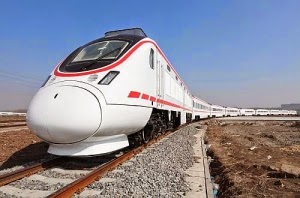 This article was first published in The Middle East magazine, London, May 2014 issue.

2014 marks the centenary of Iraq’s railway network. German engineers laid the foundations during the Ottoman Empire in 1912, as part of the planned Berlin-Istanbul-Baghdad Railway. The line was completed in 1914, connecting Baghdad with the town of Dujayl, 60 km to the north. By the late 1990s, the network was handling some three million tonnes of freight and 2.8 million passenger journeys a year.

Now Iraq’s railways, like much of the transport infrastructure, are dilapidated after decades of neglect and war, and in urgent need of repair and expansion. Most freight is transported by road.

The assets of Iraqi Republic Railways (IRR), owned and operated by the government, include about 2,850 km of track, some 127 stations, 131 locomotives and 1,900 units of rolling stock.

Several lines are still in use, from Baghdad to Basra, Samarra and Fallujah, and Mosul to Rabia, among others, providing a mix of passenger and freight services.

Upgrading the network and restoring other lines are priorities in the government’s reconstruction efforts. However, railway company officials cited by Reuters news agency admitted in 2013 that the volumes of passengers and freight carried did not generate enough income to cover employees' salaries, let alone revamp the network.

The delivery of the first of a fleet of 10 Chinese-made inter-city trains in February 2014 marked a major step forward in the plan to restore and develop Iraq’s national railway system. The contract is worth US$ 115 million, and each train will comprise two diesel power cars and eight steel bodied trailers. The trains will run on the Baghdad-Basra route at speeds of up to 160 km/h. They will have a capacity of 343 passengers in air-conditioned seated and sleeping accommodation, with catering facilities and on-board entertainment. The trains have been designed to function in the high temperatures and wind-blown dust of Iraq’s desert environment.

In 2012 IRR finished building a 32 km line between Mussayab, south of Baghdad, and the holy city of Karbala to transport hundreds of thousands of pilgrims during Shi’i religious festivals.

The company has also invested US$ 60 million in a state of the art computer based train control and microwave communication system.

IRR plans to rehabilitate some 300 km of railways in central and southern Iraq, build other lines in major cities to link them to the national network, and construct a metro system with 14 stations in Baghdad.

Iraq also aspires to become a transit hub for goods that would be shipped from Asia to Iraq's neighbours and beyond, by connecting to the planned US$ 16 billion GCC railway network (due for completion in 2018), transporting freight to Europe via Turkey.

A vast project under way at the port of Faw in southern Iraq is seen as having global strategic significance. Planned rail routes will take freight from Asia, via Faw and other Iraq ports, through Zakho in Iraqi Kurdistan and on to Europe via Turkey, bypassing the Suez Canal and reinforcing the importance of the Middle East as a major hub of international commerce.

On a regional level, negotiations continue intermittently to establish rail links with other neighbours like Turkey, Jordan and Iran. The expansion of Jordan’s container terminal at the port of Aqaba includes plans for direct rail access to Iraq. A new line is also planned from Basra to Khorramshahr in Iran’s Khuzestan province.

Iraqi Republic Railways estimates that if its planned rail projects were completed at an estimated grand total of more than US$ 60 billion, some 25 million tons of goods could eventually pass through Iraq every year.

However, specific funding has yet to be committed, and financing on such a large scale is unlikely for the time being. In recent years annual allocations by the government for railway projects have not exceeded US$ 200 million.

Nevertheless, Iraq's economy is growing strongly as it has the world fourth largest oil reserves and is one of the fastest-growing suppliers to global oil markets. The International Monetary Fund expects oil exports to increase to US$ 152 billion in 2018, while according to the Economist Intelligence Unit, Iraq’s economic growth will be over 9% on average in 2014-18.

But while in the long term Iraq could well afford to spend the billions of dollars required to revamp its railways, other problems need to be overcome before the rail sector can flourish again. Many traders prefer to transport their goods using private road haulage companies, who offer door‑to‑door services while most train stations are far from city centres. And the volatile security situation in parts of Iraq makes foreign companies wary of signing up to joint rail ventures

Future spending on railway reconstruction and development in Iraq is likely to be far lower than the hundreds of billions of dollars that its GCC neighbours are investing in an integrated railway network as well as light rail and urban metro projects, as they diversify their economies away from oil and gas and also position themselves as regional transport hubs.

But project opportunities in Iraq’s rail sector could still add up to dozens of billions of dollars. As well as the supply of track, rolling stock, signalling and maintenance equipment, “investment in supporting facilities such as inter-modal container terminals and corporatization of operations under a unified management contract continue to be areas of interest for Iraq’s rail system,” according to a 2013 US government guide to Doing Business in Iraq.

Posted by Peter Feuilherade at 00:49