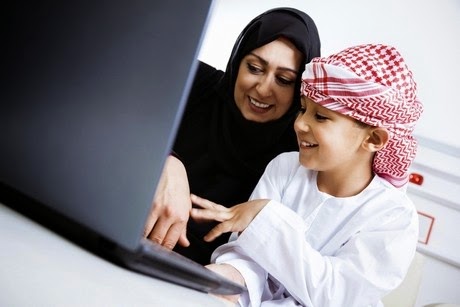 This article was first published in The Middle East magazine, London, May 2014 issue.

A report by the global consultancy Booz & Company estimates that the number of active Arab internet users will rise to 13 million by 2014, compared with 10 million in 2012. The study also reveals that around 37% of internet users in the MENA region are not satisfied with the availability of Arabic websites.

Google notes there has been a great improvement in Arabic online content creation in the last two years. However, Arabic content still comprises only about 3% of overall internet content, and there is “a huge gap between the number of people who speak Arabic and the amount of content available online,” according to Maha Abouelenein, head of communications at Google for the MENA region.

CNN recorded a 70% increase in unique users and visitors to its Arabic‑language portal, CNNArabic.com, during 2013.

The growth potential for content in Arabic is immense, and the arrival and spread of Arabic domain names will be a major boost.

The first Arabic top-level domain name, meaning “web” and transcribed in English as “shabaka”,  was approved for use in March 2013 by California-based ICANN (the Internet Corporation for Assigned Names and Numbers), the global authority which manages the world’s domain names and IP numbers. Shabaka became generally available in February 2014, in the anticipation that it will stimulate a new phase for Arabic content online.

dotShabaka Registry is a Dubai-based internet technology company behind the new domain name. Yasmin Omer, general manager of dotShabaka Registry, explained that while previously search engine users had to type in English and use web translation to get into Arabic websites, with the introduction of .shabaka, they could now type in Arabic and get directly into Arabic content. “There is no better way for businesses to demonstrate their affiliation with the Arabic language online than by registering a domain name," Omer told the Abu Dhabi newspaper The National.

As the market for online content in Arabic expands, a growing proportion of the content is appearing in video rather than text form.

According to a March 2014 survey from Jordan-based Startappz, an app developer and digital advertising agency, about 93% of the videos produced in the Middle East are in Arabic. Technology and gaming, news, music and comedy are all popular categories.

"We have 310 million views a day and have two hours of video uploaded every minute and most of it is in Arabic," said Diana Baddar, YouTube video partnerships manager for MENA. “We also have the second largest presence in the MENA region after the US and have thousands of creators creating content in Arabic, which is diverse and popular.”

Top categories for videos produced in the Arabic language “are across general entertainment like comedy, music and movies”, according to Google.

Although YouTube offers only visual content, the site could be significant in adding to the overall online content in Arabic. “General Arabic content, regardless of where it came, is a plus. It is the right step in increasing Arabic content,” said Dr Fayeq Oweis, a language services manager for Google.

But analysts point out that increasing digital content does not simply mean creating more websites and mobile apps in Arabic. High-quality content is also required from producers in ‘traditional’ industries such as writers, film makers, game publishers and government bodies.
Education and learning, information services, entertainment and gaming, and social media are seen as among the most profitable sectors. A report by the US market research firm Ambient Insight forecast that revenues for self‑paced e‑learning products in the Middle East would reach US$ 560 million by 2016, with the public and private academic institutions comprising the region’s biggest buyers.

Another area to benefit from the expansion of Arabic content is the Middle East’s e‑commerce market, in which the UAE, Saudi Arabia and Qatar are the current leaders. A study by PayPal forecasts that e‑commerce across the MENA region will grow to US$ 15 billion by 2015, with 10% of transactions done via mobile devices. The Gulf has some of the highest rates of smartphone penetration in the world, with the UAE close to 200%, closely followed by Saudi Arabia.

Annual revenue on smartphone applications in the Middle East is predicted to reach more than US$ 200 million by 2015 as demand for Arabic‑language applications increases.

In March 2014 the Dubai-based e‑commerce site Souq.com raised US$ 75 million in funding from the South African media conglomerate Naspers. Souq will invest part of this funding on developing its mobile technology, as its founder and CEO Ronaldo Mouchawar is adamant that the high mobile penetration rates in the GCC region are providing a major boost to e-commerce.

The deal for a stake in Souq.com valued the company at more than US$ 500 million. A Wall Street Journal commentator described it as “another milestone for e-commerce in a region traditionally averse to transacting online”.

Although the private sector has been the driving force behind most Arabic content produced in the region, multimillion dollar projects to expand electronic government (e‑government) have also created opportunities for content developers. Again, the lead is coming from the GCC states. All six member countries operate their own e‑government portal. They are now in transition to the next stage, which will see the rapid expansion of the provision of public services over smartphones and similar mobile devices.

Finally, another massive expansion of Arabic content is expected to flow from the various “smart city” projects that have been launched in the Gulf in recent years: six in Saudi Arabia, three in Qatar and two in the UAE: Masdar City in Abu Dhabi and Smart City Dubai.

Posted by Peter Feuilherade at 01:03