Automated or "self-driving" personal transport systems are no longer the preserve of science fiction. They are now up and running at several locations around the world. IEC standardization work will prove instrumental in the expansion of systems that use innovative pod-type vehicles as well as for two- and three-wheeled "personal transporters". 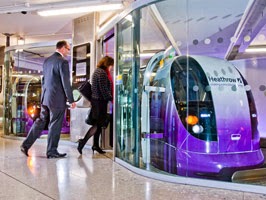 
This article first appeared in the March 2014 issue of e-tech, published by the International Electrotechnical Commission (IEC), Geneva

PRTs are intended to combine the convenience and privacy of cars with the environmental benefits of mass transit. Their primary aims are to achieve optimum door to door mobility, improve safety, reduce environmental impact and lower operational costs.

They are part of the advance towards a new era of "smart mobility" in which infrastructure, methods of short distance transport, passengers and goods will be increasingly interconnected, especially in urban areas.

PRTs operate on networks of specially built guideways, with traffic controlled by a central computer to eliminate collisions and minimize congestion.

They are usually powered by onboard batteries recharged at stops, and guided by GPS (Global Positioning System) to destinations selected on touchscreens. Conventional steering can be used on a simple track consisting only of a road surface with some form of reference for the vehicle's steering sensors.

The oldest system similar to a PRT has been in operation since 1975 in the US city of Morgantown, West Virginia. Comprising cars which hold about 20 passengers and run on a ground-mounted rail, it is more properly described as "Group Rapid Transit". 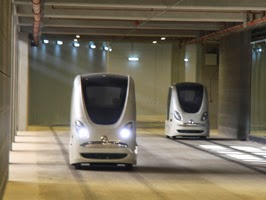 The driverless pod service at Heathrow, operated by UK company Ultra Global, was launched in May 2011. The system comprises 21 pods running at a maximum speed of 40 kph along guideways on a 3,9 km route between Terminal 5 and a business car park; up to 100-120 vehicles can be dispatched every hour.

The pods are powered by electric motors and use Lithium ion (Li-ion) batteries which recharge when parked at stations, bypassing the need for electrification along the track. The batteries provide an average 2 kW of motive power, and add only 8% to the gross weight of the vehicle.

The pods have onboard computers and are guided by laser sensors. Passenger information is updated on LCD screens in the pods, and a wireless communication system allows for two-way exchange of data and commands between vehicles and central control.

Passenger safety measures include continuous CCTV and black box monitoring of all pods; an independent "Automatic Vehicle Protection" system that protects against pod collision on the guideway; safety interlocks between the brakes, motor and doors; and emergency exits, smoke detectors and fire extinguishers fitted in all pods.

A complete pod system like the one at Heathrow, including guideway, stations, vehicles and control systems costs somewhere between USD 7 million and USD 15 million per km to construct, according to the system's operators. They say the pods have saved over 200 tonnes of CO2 per annum and reduced the number of bus journeys on the airport's roads by 70 000 a year.

As part of a GBP 75 million UK government scheme to enable businesses to make and test low carbon technologies, trials of driverless cars will start in Milton Keynes, a so-called "new" town 80 km north of London which was built on a "grid plan" in the 1960s.

The specific technology has not yet been announced but plans are for an initial batch of 20 driver-operated pods able to carry two passengers to enter service in 2015, followed in 2017 by 100 fully autonomous (driverless) pods that will run on pathways alongside but separated from pedestrian areas. The vehicles will be able to travel at up to 19 kph and will be equipped with onboard sensors that will enable them to detect and respond to obstacles.

The driverless electric pods used in Masdar City near Abu Dhabi have carried more than 820 000 passengers since the system, designed by Dutch company 2getthere, was launched in November 2010.

Masdar City is an initiative by the UAE government to build a new small city based on renewable energy and developed around green technologies, including public transport

The pods run at 25 kph and are powered by lithium phosphate batteries, which are charged using solar energy. They travel on tracks equipped with embedded magnets placed every 5 m which the vehicle uses, along with information about wheel angles and speed, to determine its location. Pods designed to carry freight also operate at the site.


Feasibility tests in other countries

Other countries examining the feasibility of PRT systems include Taiwan and Brazil. In Florianopolis, a provincial Brazilian city in which large parts of the city are laid out on a coastal island while the remainder of the city is on the mainland, car traffic between the two is served by a single bridge, leading to peak time bottlenecks. The local authorities are mulling over using PRT as a local distribution network within the dense central business district situated on the island, as part of a multimodal transport proposal that would include ferries and monorail.

In Singapore, NTU (Nanyang Technological University) and French company Induct Technology are collaborating on tests of a driverless electric shuttle vehicle powered by lithium polymer batteries and capable of carrying 8 passengers at a maximum speed of 20 kph. The vehicle uses laser mapping and sensors to manoeuvre, runs on a predefined route and recharges at docking stations. It serves as a testbed for new charging technologies such as wireless induction and new super capacitors for electric vehicles.

Other personal urban mobility prototype vehicles have been demonstrated in recent years but never put into production. They include self-driving pods unveiled by the US multinational General Motors Company in 2010. Powered by electric motors and with a range of 65 km, the two-seater vehicles were crammed with technology including roof mounted GPS, Wi-Fi, vehicle to vehicle communication systems, front-mounted ultrasonic and vision systems and collision avoidance sensors.

The top priority in the operation of automated public transport networks is to ensure provision of the highest levels of safety while not restricting the introduction of new technology. Such networks depend heavily on computer-based management, control and communication systems.

TC 9: Electrical equipment and systems for railways, is responsible for International Standards relating to the systems, power components and electronic hardware and software used in fully automatic transport systems operating in the wider context of urban rail and metro transport (see article on TC 9 in this e-tech). This includes safety aspects such as passenger alarm systems and automatic system surveillance. TC 9 works in liaison with other relevant IEC TCs, for example, coordinating with TC 69: Electric road vehicles and electric industrial trucks, on the development of double-layer capacitors for energy storage, and with TC 56: Dependabilty, which covers the reliability of electronic components and equipment and is included as a characteristic of quality.

Existing PRT networks, albeit small-scale, combine the advantages of flexibility in terms of planning available with individual means of transport with those of urban public transport systems. They have proved safe, reliable and environmentally friendly and offer a feasible public transport option for tourist attractions, business parks, hospitals and university campuses. They could also be one way forward for "last mile" solutions in urban environments, although the density of traffic in cities would pose more complex and diverse challenges than, for example, in an airport setting.

Consumers would pay a fraction of the cost of buying and running an individual car, while building dedicated trackways would be much cheaper than the cost of most traditional transport infrastructure.

As the Heathrow system's operator told e-tech in an interview, "an innovative and now proven technology that responds to patrons' desire for on-demand, direct and personal transport should be seen not only as a viable but altogether a more economically, socially and environmentally beneficial alternative to conventional forms of public transport".

The wider significance of driverless pod networks is that they are part of a long term trend in the car industry to develop autonomous vehicle control systems equipped with a combination of sensors and dedicated software for the personal mobility sector.

Tests on autonomous cars have already begun. As well as the Milton Keynes trial set for 2015, NTU in Singapore has tested a driverless electric vehicle on a 2 km shuttle route, while autonomous electric cars have also been tested on roads in Japan. In the US, the technology giant Google has been licensed to experiment with driverless vehicles, and says that in tests its cars have logged about 500 000 km without an accident. And in 2017 the Swedish city of Gothenburg will start a pilot project with 100 cars and 100 regular drivers who will manually drive cars to roads where they then join road trains and switch to autonomous driving.

Software will be crucial to autonomous travel, not only to calculate a vehicle's position and route from a constant stream of incoming data, but also to react to unforeseen obstacles.

However, it could be decades before passenger cars driving autonomously win consumer and government acceptance to reach the mass market. One way to help promote autonomous driving would be to incorporate technologies such as coordinated traffic lights and smart parking systems in the design of smart cities.

The US based market research and consulting firm Navigant Research forecast in August 2013 that sales of autonomous vehicles would rise from fewer than 8 000 annually in 2020 to 95,4 million in 2035, representing 75% of all light duty vehicle sales by that time. In addition to advanced driver assistance features now available in some vehicles, such as adaptive speed control, automatic emergency braking and lane departure warning, new features that could assume control of more aspects of driving would be introduced gradually, Navigant predicted.

"The first features will most likely be self-parking, traffic jam assistance, and freeway cruising – well-defined situations that lend themselves to control by upgraded versions of today’s onboard systems", said David Alexander, senior research analyst at Navigant Research. 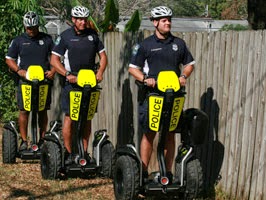 Personal transporters can be used for indoor, sidewalk, cross-terrain and patrol use

Electric stand-up personal transporters (like Segways and their one or two-wheeled derivatives, or alternative machines such as Roboscooters) are devices that are controlled by the body movements of the driver and are equipped with self balancing mechanisms

They are also available as personal scooters in three-wheeled configurations, which offer greater stability and the option of riding seated on larger models. These vehicles are generally powered by Li-ion batteries, removable on some models to allow longer operational cycles. Some versions may include regenerative braking capability, allowing batteries to recharge during deceleration.

Stability is maintained using a combination of computers, tilt sensors, gyroscopic sensors and motors that rotate the wheels forwards or backwards as required for balance or propulsion.

Manufacturers in the US estimate the operating costs of three-wheelers used in police patrol duty to be around USD 0,10 per day.
Posted by Peter Feuilherade at 00:23