Initial estimates for the economic losses expected from Egypt's political turmoil run into hundreds of millions of dollars. 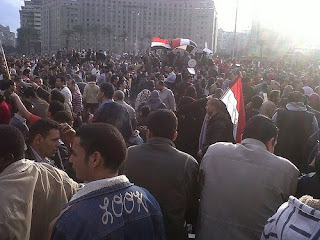 
Article first published as Egypt Counts Cost of Protests, Internet Down-Time on Technorati.
The Egyptian government’s blocking of Internet services for five days in a bid to undermine coordination of the protests against President Hosni Mubarak is likely to have cost the country 90 million dollars, according to preliminary estimates by the Paris-based Organization for Economic Cooperation and Development on 3 February.
The government ordered most internet service providers (ISPs) to suspend services on Friday 28 January, and access was only partially restored on Wednesday 2 February. During the shut-off only a tiny number of users in Egypt were able to access the net, some by using expensive satellite services.
More than 17 million Egyptians use the Internet, over 20% of the population, according to Internet World Stats data from February 2010. Other estimates, adding new users in the last year, put the figure as high as 23 million. About 4 million Egyptians have Facebook accounts.
The blocked telecommunications and Internet services account for roughly 3-4% of GDP, or a loss of 18 million dollars per day, the OECD said.
The Internet shut-off was not total, as the authorities allowed the small ISP Noor to operate until Monday 31 January. Noor's high-profile clients include the Egyptian Stock Exchange, the Commercial International Bank of Egypt, the National Bank of Egypt and Egypt Air.
The OECD warned that the long-term impact of totally blocking the Internet could be greater, as Egypt found it more difficult in the future to attract investment from international high-tech firms and assure them that the networks would remain reliable.
The continuing political crisis is also having an economic impact on Egyptian banks.
U.S. ratings agency Moody's on Wednesday 3 February downgraded the ratings of five Egyptian banks, which could reduce their ability to borrow money. The move followed the agency's lowering of the government's debt rating on 31 January.
The banks affected are Bank of Alexandria, Banque Misr, Commercial International Bank, National Bank of Egypt and Banque du Caire.
The Voice of America quoted Moody's as saying the current political uncertainty in Egypt may disrupt economic activity and "negatively impact foreign direct investment flows" into the country.
Most banks have remained closed in recent days. One consequence has been that Egyptians based in the Persian Gulf states, who make up the bulk of the population living abroad, have been unable to send vital remittances back home. Egypt relies heavily on remittances from its citizens abroad, which totalled about 7.6 billion dollars in 2010, according to World Bank data. The Egyptian currency has hit six-year lows amid the unrest, the Arabian Business website noted.
With clashes in Cairo and other major Egyptian cities between pro- and anti-Mubarak groups becoming more violent, it is too early to predict the long-term damage to Egypt's tourism sector, which earned the country more than 11 billion dollars in the last fiscal year.
Posted by Peter Feuilherade at 09:56