Book Review: "Light from the East" - the Science of Medieval Islam

American scholar John Freely has written a comprehensive but readable history of Islamic science for the general reader. 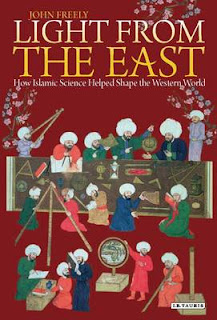 "Light From The East" by John Freely
The scientists and philosophers of the medieval Islamic world, based in centres of
learning ranging from Central Asia to Spain, preserved the knowledge they acquired
from earlier ancient empires and later conveyed it to Europe. The immense scope
of their work influenced Western thinkers and helped to inspire the Renaissance,
writes American scholar John Freely, who has taught physics and the history of science
at Bosphorus University in Istanbul for more than half a century.

READ THE FULL REVIEW ON SUITE 101
Posted by Peter Feuilherade at 07:08