A Shropshire Guide: Stepping Up To Bridgnorth

The photogenic market town of Bridgnorth in southeastern Shropshire is also home to a public transport oddity. 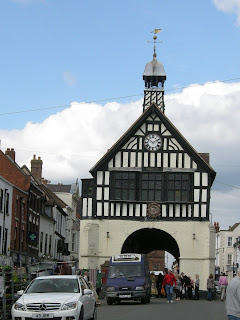 The ancient market town of Bridgnorth is actually two towns - the High Town, perched on a ridge above the River Severn and with a view that King Charles I called "the finest in all my kingdom", and the Low Town, spread along the river bank 120 feet below, which was formerly a thriving port. The two are connected by a steep lane called Cartway, seven stairways, and a modern road. Or you could take a ride on England's only remaining inland electric cliff railway.
Bridgnorth's many historic and photogenic sights include the ruins of a Norman castle, several timbered buildings from the 16th century onwards, and St. Mary Magdalene parish church, built by Thomas Telford in the late 18th century.
The town is also the northern terminus of the Severn Valley Railway (SVR), a steam-hauled passenger train service which carries tourists on a picturesque 16-mile cross-country route to Kidderminster in Worcestershire.
The Castle Ruins
The ruins of Bridgnorth Castle are in the High Town, on a cliff by the side of the River Severn. Little remains to see now, apart from the early 12th century Norman tower and other stonework added decades later during the reign of Henry II (1154-1189).
What is left of the tower leans at a perilous angle of 15 degrees, more than the Tower of Pisa, as locals are fond of telling visitors. The reason, as the Bridgnorth tourist website recalls, is that in 1646 "the building was blown up in the Civil War by the parliamentarians - who botched it, as parliamentarians are wont to do".
Churches
St. Mary Magdalene is the parish church of Bridgnorth. It was built by the eminent Scottish architect and civil engineer Thomas Telford in 1792 to a classical design, on the site of the original medieval chapel of the adjacent castle.
St Leonard's Church, also in the High Town, dates from the early 13th century, although it was extensively rebuilt in the 1840s and 1860s.
Cliff Railway 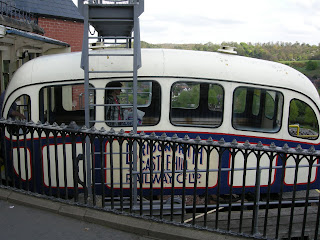 (Image - Peter Feuilherade)
Bridgnorth boasts the steepest cliff railway, or "funicular", in the UK. It began operating in 1892, and was originally driven by a system of water balance. Now powered by an electric winding engine (added in 1943), the Castle Hill Railway connects the Low Town and the High Town in less than 60 seconds. At £1 a ride (return tickets only – for unexplained reasons, the company does not offer one-way tickets), it is a popular alternative to the scenic but tortuous walk uphill.
Historic Buildings and Other Sights
The town's oldest house is Bishop Percy's House, a gabled and timbered building which dates from 1580. It was the birthplace in 1729 of Thomas Percy, poet and antiquary, who later became Bishop of Dromore in County Down, Ireland.
The High Street is dominated by the 17th century Town Hall, a striking half-timbered building which stands on open arches. The street is lined with long-established family-run shops. On Market Days, local produce and antiques are in great demand.
For hard-to-find bottled ales and farm cider, as well as international beers, head for the Hop & Stagger, a specialist shop on West Castle Street.
A popular walk takes day-trippers half a mile south from Bridgnorth, a few hundred yards after the bypass bridge along the B4555 Highley road, to visit Daniel's Mill, owned by the same family for more than 250 years. This corn mill, with a stream running up to a viaduct of the SVR, boasts the largest waterwheel still in use in England.
More information:
Bridgnorth and District Tourist Association
Shropshire Tourism
Posted by Peter Feuilherade at 09:46