Despite recent job cuts in the UK's armed forces, the RAF brings the past and the present together and puts on a great display at the 2012 Cosford air show on Sunday 17 June.

This story was first published on Suite101 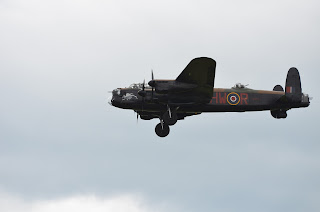 Frontline Royal Air Force (RAF) jets that recently saw service in Afghanistan and Libya as well as historic and iconic aircraft from earlier conflicts were in action again at the Cosford Air Show this week. The annual display, which was seen by some 40,000 people this year, is the biggest in the West Midlands and one of only three RAF officially endorsed shows.


The highlights included high speed displays by an RAF 6th Squadron Eurofighter Typhoon and two Tornado attack aircraft. Eurofighter Typhoon FGR4s and Tornados both served in operations over Libya in 2011, and Tornados are currently deployed in Afghanistan to carry out reconnaissance missions and provide close air support for Coalition troops on the ground.


A fly-past by an Avro Lancaster bomber and a Spitfire from the Battle of Britain Memorial flight evoked thoughts of the UK’s aviation heritage, as spectators remembered all the RAF personnel who had served in previous conflicts, particularly World War Two.


As well as a display by the ever-popular Red Arrows aerobatics team, the Cosford air show was also one of the last chances to see a flypast by an RAF Vickers VC10 tanker/transport before the aircraft’s imminent retirement from service. In March 2013 the RAF will stop operating its VC10 fleet, which was first deployed in 1966. 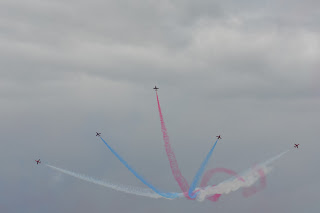 But as RAF staff at Cosford celebrated the 2012 air show’s success, they also reflected sombrely on the impact of the latest round of redundancies in the UK armed forces announced just a few days previously.

Nine hundred posts are being cut from the RAF, as well as 2,900 from the Army and 300 from the Royal Navy. The job losses are part of the largest personnel cutbacks for more than two decades. Those affected include members of all three services with experience of fighting in two Gulf Wars, peacekeeping in Bosnia and Kosovo and counter-insurgency in Iraq and Afghanistan.

Posted by Peter Feuilherade at 10:54