Blists Hill, Ironbridge - a reminder of our industrial heritage

March 2012 marked the centenary of the closure of the Blists Hill blast furnaces, which are today iconic ruins at the heart of the award-winning Ironbridge Gorge Museum, showcasing the relics of the cradle of the Industrial Revolution.
I am now a volunteer guide at Blists Hill Victorian Town, and this is the story of these remarkable structures and the seismic impact of the shutdown on the local community back in March 1912: 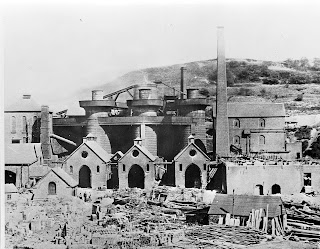 It was 100 years ago this week that the Madeley Wood Company shut down its three blast furnaces at Blists Hill for the last time, after eight decades of iron production at the site.
Now part of the Blists Hill Victorian Town museum, the remains of the furnaces are one of the most defining features of the Ironbridge Gorge, and a major industrial monument.
When they were closed in 1912, several hundred men lost their livelihood, causing major disruption to the local community. The closure happened during a five-week national coal mining strike in support of a minimum wage for miners, adding to the atmosphere of industrial unrest and social discontent. Across Shropshire, hundreds of workers in other industries, such as gasworks and railways, were temporarily out of work because of coal shortages. Weeks of wintry weather added discomfort to their economic distress.
"In consequence of the Blists Hill Furnaces having been blown out, upwards of 200 workmen have been thrown out of employment," the Wellington Journal and Shrewsbury News reported at the time. Alderman A. B. Dyas, speaking at a public meeting in Madeley on 25th March 1912, said he was "sorry for the poor people thrown out of work through the blowing out of the furnaces, and he could see nothing but the workhouse staring them in the face".
The furnaces produced iron for 80 years after they were built between 1832 and 1844. The Madeley Wood Company, formed in 1756, had previously operated the two Bedlam blast furnaces alongside the River Severn, a mile west of Blists Hill. The company was run by the Anstice family, influential in the history of the Gorge, and held mineral leases in Madeley Parish.
By the 18th century, the mining of clay, coal and iron ore was well established at Blists Hill. The missing ingredient required for iron-making - limestone – was widely available nearby, with deposits at Lincoln Hill near Coalbrookdale, and further afield at Wellington and Wenlock Edge.
The completion of the Shropshire Canal and the building of the Hay Inclined Plane in the early 1790s provided a means of bringing in limestone and transporting finished goods from Blists Hill. But it was not until four decades later that the Madeley Wood Company built the first blast furnace there in 1832, adding another two in 1840 and 1844.
Originally the furnaces were conical structures, made of refractory brick clad with wrought iron plates, and stood about 50 feet high, on brick and stone bases. Huge blowing engines on either side blasted air into the furnaces. The original engine house, to the north of the furnaces, was demolished around 1873, when the engine house that visitors see today was constructed. The south engine house dates from 1840. 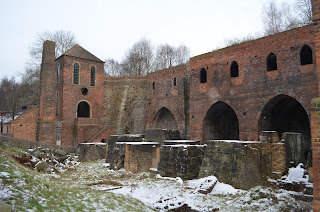 The Blast Furnaces in February 2012
Each engine blasted 12,500 cubic feet of air (the size of a large detached house) every minute into the furnace, supplying oxygen to the fuel and making it burn with an intense heat. The coke (produced by baking coal at high temperatures), iron ore and limestone were transformed into molten iron and a mix of waste products, or slag. Most of the iron was poured into a large central trench with smaller trenches running off it, resembling a sow and her piglets – hence the term "pig iron" – while the rest was cast on site to make pots and pans.
In their heyday the furnaces would have run continuously day and night, stopping only for repairs or lack of demand. Iron continued to be produced at Blists Hill until 1912, although by then the industry in Shropshire was in decline as steel production had taken over since the 1880s.
A few years after the furnaces were taken out of service, the First World War broke out and Blists Hill lay derelict for decades. In the 1960s, the slag from the furnaces was used as hard core for building Britain's first motorways. The Ironbridge Gorge Museum carried out major repairs on the site in the 1970s and again in 1993.
Today, although only the bases of the furnaces remain, they continue to impress visitors to Blists Hill, and are a striking reminder of the Gorge's rich industrial heritage.
Posted by Peter Feuilherade at 11:13