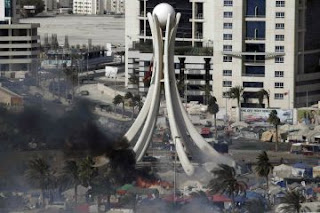 
One of the world's biggest arms exhibitions ends in London today after four days of weapons salesmen touting their wares, ranging from guns that can shoot around corners to an "invisible" tank.

With no respite in sight to the economic gloom on both sides of the Atlantic, major defense cutbacks are under way in the UK and the United States.

The British government plans to reduce defense spending by 8 per cent by 2015, and the US is cutting at least $350 billion from previous project spending.

So exhibitors at this week's Defense Security and Equipment International arms fair are looking instead to markets such as India and Africa to boost sales.

And with the continuing unrest in many Arab countries, the Middle East arms market remains extremely lucrative, and unaffected by the international outcry about the violence that governments such as Syria and the Gaddafi regime in Libya used against protesting citizens during the Arab Spring.

Human rights activists and anti-arms campaigners held a series of events across London in protest against the presence of delegates from Bahrain and Saudi Arabia, both accused of using weapons bought from the UK to suppress demonstrations.

Of the 65 national delegations attending the arms fair, 14 were from what human rights groups called "authoritarian regimes".

Libya was not invited, but Western arms dealers will be buoyed by National Transitional Council Chairman Mustafa Abdel Jalil's statement that Tripoli was not planning to buy Russian weapons, and would review arms contracts with Russia signed by the former Libyan government. Russia said earlier this year that it stood to lose as much as $4 billion in existing and potential deals with the Gaddafi regime.

British Defense Secretary Liam Fox told delegates at the arms fair that Britain's weapons manufacturers should tailor their products for overseas markets, to protect defense and security jobs and profits during a period of spending cuts at home.

Exports of UK-made weapons would help drive the country's economic recovery, Fox said. But he insisted that Britain would not arm repressive regimes, describing the UK's export-licensing guidelines as being among the toughest in the world.


"Respect for human rights and fundamental freedoms are mandatory considerations for all export license applications, which we consider on a case-by-case basis… When conditions change we act swiftly to revoke licenses that do not meet our strict criteria - just as we did earlier this year as the events in the Middle East and North Africa unfolded," Fox said.

A group of British parliamentarians have called on ministers to stop arms sales to authoritarian regimes around the world. They said that UK Trade and Investment, the government body responsible for promoting British defense exports, had countries including Algeria, Iraq, Libya, Pakistan, Saudi Arabia and the United Arab Emirates as "arms export priority markets" for 2010-2011.

With the exception of Libya, sales efforts were continuing, causing concern over "the inherent conflict between the government's promotion of military exports and its stated desire to help protect human rights overseas", the MPs added.

Green Party MP Caroline Lucas noted that in 2010 the UK had issued over £200m ($318 million) worth of equipment requiring export licenses to Libya, "providing Colonel Gaddafi with resources including tear gas, crowd control equipment, and ammunition for wall and door-breaching projectile launchers."

A government spokesman in London commented: "The British position is clear: we will not issue licenses where we judge there is a clear risk that the proposed export might provoke or prolong regional or internal conflicts, or which might be used to facilitate internal repression."

Britain has the world's second-largest defense industry after the United States, which generated more than 22 billion pounds ($35 billion) in sales in 2010, according to a survey published on 12 September by ADS, the trade group that promotes the UK aerospace, defense, security and space industries. UK defense exports contributed 9.5 billion pounds ($15 billion), about 43 per cent of turnover, with three-quarters of sales generated by the aerospace sector.
﻿
Posted by Peter Feuilherade at 03:28