This article appeared on MENA Rail News on 6 June 2013


On top of high levels of unemployment and complex political transitions in North Africa, the weaknesses of European economies have affected those countries in the region that are dependent on European markets. In the aftermath of the Arab Spring uprisings, political and social tensions also continue in Egypt, Libya and Tunisia. But infrastructure and construction projects are still of major importance, and a steady stream of new contracts in the rail sector in recent months is cause for optimism.

The African Economic Outlook 2013, published in May 2013, predicts that the economic climate in North Africa will generally improve in the near future. “Due to the resumption of oil production and exports, Libya’s GDP bounced back by 96% in 2012, boosting growth in North Africa to 9.5%, after the region’s GDP had stagnated in 2011,” the report notes. While in Egypt growth remains below pre-revolution levels, Tunisia’s economy recovered in 2012 and is forecast to grow by around 3.5% in 2013, rising to around 4.5% in 2014. Morocco and Mauritania are predicted to enjoy continued solid growth in 2013/14 at average rates of 6% and almost 5% respectively. In Algeria, growth is expected to accelerate from 2.5% in 2012 to above 3% in 2013 and 4% in 2014.

Although Egypt is plagued by a mounting economic crisis, the European Union has allocated US$ 160 million towards the development of the transport sector, onethird of which will fund construction of the third phase of the Cairo Metro. Grants totalling US$ 250 million from Kuwait and the Arab Fund for Economic and Social Development will support electronic signalling projects on the Banha-Zagazig line north of Cairo. And during a visit by Egypt’s Islamist President Mohamed Mursi to Moscow in April to drum up financial support, it was agreed that Russian companies would participate in rail and metro projects. However, Egypt’s railways remain plagued by outdated rolling stock and low safety standards, and it is difficult to see how a proposed high-speed train project, costing an estimated US$ 3.5 billion, will attract either local or foreign investors while the financial situation deteriorates. 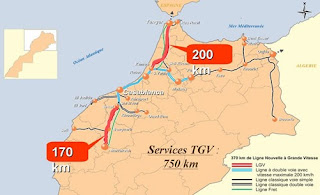 There is better news from the other side of North Africa, where both passenger and freight traffic in Morocco are on the increase. The construction of the 350-km high-speed rail (TGV) line between Tangier and Casablanca, in partnership with France, is regarded as the kingdom’s most important transport project. In April France’s Colas Rail and its subsidiary Colas Rail Maroc, as part of a consortium with Egis Rail, won a design-build contract for a 185-km double track highspeed line between Tangier and Kenitra. The total contract value is US$ 175 million, of which US$ 160 million are earmarked for Colas Rail and Colas Rail Maroc. A consortium comprising Ansaldo STS France and Cofely Ineo was awarded a US$ 155 million contract to design and supply signalling, train control and telecommunications systems for the line, which is scheduled to open during the first half of 2016.

Eventually the TGV network will extend over 1,500 km. According to the international business intelligence firm Oxford Business Group (OBG), “the move to set up a joint venture for TGV maintenance and establish a training institute will be a key driver in the Moroccan authorities’ bid to create a qualified local workforce with know-how for future ventures.” 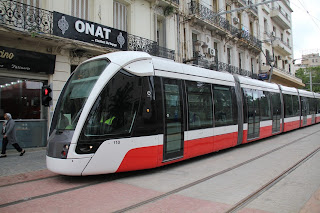 In May a new 18-km tram network opened in Oran, Algeria’s second city. The rail network in Algeria is currently concentrated in the north of the country and comprises 3,660 km of standard gauge and 1,140 of narrow gauge. The government plans to modernize the network and electrify existing rail operations, as well as develop a 1,300km highspeed east-west line that will run from Tunisia to Morocco, with branches connecting with major ports and cities. Algeria has allocated US$ 32 billion to the development of its rail infrastructure during the two five-year plans covering the decade from 2005 to 2014, Ministry of Transport spokesman Nassim Mustapha said in March 2013. Much of the expenditure will be spent linking the more developed rail networks in the north to towns in the less well-connected south. But officials admit that many rail projects have been held up owing to problems connected with “expropriation”. Political issues are also affecting the sector’s expansion, with Algerian newspaper Le Matin in March 2013 referring to “the state of tension which prevails in several towns in southern Algeria”.

In Tunisia, Colas Rail, in a consortium with Siemens and Tunisian firm Somatra-Get, won a US$ 187 million contract in February to build the first two lines of a high-speed railway network in the capital Tunis. Construction work on the project, financed by a consortium of international backers and the Tunisian government, is scheduled to start in mid-2014 and is expected to be completed in 2018.
Meanwhile, a definitive announcement is awaited from Libya about the future of stalled projects agreed before the revolution and valued at US$ 12 billion. Construction to build more than 2,000 km of new railway track would have been split between the China Railway Construction Corporation (CRCC) and Russian Railways (RZhD). The Libya Herald newspaper reports that while CRCC remains silent on its future activities in Libya, RZhD has said it was “taking all possible steps to begin negotiations with Libya in order to discuss the future prospects for the resumption of the project and to develop a joint plan of action…“.

In the words of Ernst & Young’s Africa Attractiveness Survey (2013), “countries, such as Morocco, that are making substantial improvements in transport and logistics, are the ones that have implemented long-term and comprehensive reforms and investments across the transport and logistics supply chain.”
However, analysts say that the fallout from the Arab Spring revolutions continues to impede business across North Africa, even in countries like Algeria which did not go through a radical political upheaval.

John Hamilton, London office director of the business intelligence and consultancy company Crossborder Information, told MENA Rail News: “The common denominator is uncertainty created by political change and the lack of central authority… Across the whole region, the political shifts mean that investors and contractors will have to pay close attention to their local partners.”
Posted by Peter Feuilherade at 05:49