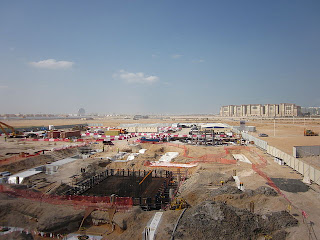 Masdar "smart city" takes shape in Abu Dhabi
This article was first published in The Middle East magazine, March 2013
Oil producing states in particular are looking for ways of reducing their own dependence on diminishing fossil fuels. Another incentive is that they can earn far more by exporting their oil instead of using it domestically.


Energy consumption in the Middle East has grown rapidly in the last five years, increasing by 22% between 2007 and 2011. The International Energy Agency (IEA) forecasts that the region’s energy demands will quadruple by 2050.


One of the main factors behind the region’s ever-increasing consumption of electricity is population growth, which the IAE puts at around 1.5% a year. According to the World Energy Council, a UN-accredited organization, the Gulf region alone will require 100 gigawatts (GW) of additional power by 2020 to meet increased demand, running at 7.7% annually.


In 2011 global renewable energy investment reached a record $257 billion, although the MENA region accounted for only $5.5 billion, just over 2 per cent of the total.


Political and social turmoil led to investment across the MENA renewable energy sector plummeting by 18 per cent from 2010, despite constantly increasing demand for electricity fuelled by rising populations, growing urbanization and economic growth driven by industrialization.


However, as a 2012 report by Ernst & Young noted, “many countries in the region are seeking to increase the proportion of renewable energy in their generation mix as they seek to reduce local consumption of fossil fuels, meet ever-increasing local demand, and even start to diversify their economies away from hydrocarbons.”


At least 10 solar energy projects worth a combined $6.8 billion are currently under way in Egypt, Jordan, Morocco, the UAE, Kuwait and Oman, according to research specialists Ventures Middle East. 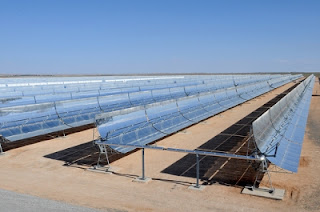 Morocco solar energy project (Photo: Global Arab Network)
Three years ago Morocco invested $9 billion in a national solar plan whose long-term aim is to provide nearly 40% of the country’s energy needs. It is now looking for another $1.25 billion in funding for a concentrated solar power (CSP) project, of which a quarter has been provided by the African Development Bank, with the World Bank and the European Investment Bank also participating.


Masdar, the renewable energy company backed by the government of Abu Dhabi, the UAE's richest emirate, invests in clean energy technologies either directly or through venture capital or private equity funds. As well as its 100-MW CSP plant in Abu Dhabi, Masdar runs solar power plants in Spain and a 1,000-MW offshore wind farm in the UK. And the UAE is developing a photovoltaic solar project in Dubai which will require investment of some $3.5 billion.


Oman, another front-runner in the Middle East renewable energy field, plans to produce 10% of its total electricity requirement from renewable energy resources by 2020 and is working with German investors to manufacture solar panels locally for domestic use and export.


Saudi Arabia and the UAE are forecast to lead the generation of renewable energy in MENA, but other countries have ambitious plans too.


Saudi Arabia is seeking investors for a $110 billion solar power programme over the next two decades to produce 41 GW by 2032, of which 25 GW would be produced from solar thermal plants and the rest generated from photovoltaic panels.


Qatar is building a $1.1 billion solar-grade polysilicon production plant intended to be the foundation of the country’s solar industry, providing materials for the manufacture of solar panels. The stadiums where Qatar will host the 2022 football World Cup in intense summer heat will use solar energy to power their climate control systems.


And Iraq, despite having the world’s fourth-largest oil reserves, is to spend up to $1.6 billion on solar and wind power plants over the next three years to add 400 MW to the national grid to help curb daily power cuts.


But the MENA renewable energy sector has suffered setbacks too. In late 2012, the German technology giants Siemens and Bosch pulled out of Desertec, a Munich-based $ 500 billion initiative which plans to produce electricity from huge solar thermal power plants in the Middle East and North Africa to supply some of the energy needs of the region and Europe too. 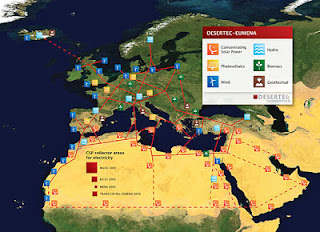 Desertec - mired after five years
The German multinationals cited economic factors for their withdrawal from the venture, which has achieved little on the ground since it was launched five years ago. And persistent political instability in parts of the region was also blamed for waning interest in Desertec by many European governments, some of them, like Spain, more concerned by the crises in their own ailing economies.


However, new private partners have expressed interest in joining the project, along with China's national grid corporation. If the project stays on course, by 2050 these solar power plants could supply up to 15% of Europe's electricity needs as well as a substantial portion of the power needs of the producer countries.


The renewable targets set by some MENA countries are certainly ambitious. Egypt and Qatar say they will produce 20% of their energy from renewables by 2020 and 2024 respectively. Algeria has plans to produce 22 GW of power from renewables between now and 2030. Saudi Arabia has announced targets of 10% by 2020 and Kuwait 15% by 2030. Only time will tell if these targets are realistic, or rather a mirage.


And while the MENA region’s potential for renewable energy is huge, so too are the sums involved. A November 2012 conference paper by experts from Abu Dhabi’s Masdar Institute estimated that to create another 120 GW of new MENA power generation capacity by 2017 would require as much as $250 billion, when transmission and distribution costs were included.


Geopolitical analyst Jen Alic of Oilprice.com believes the situation in Europe, where some governments have cut renewable energy subsidies, particularly in the solar sector, and others are considering cuts, may boost funding for MENA renewable energy projects.


“Solar investors in Spain, German, Italy and the United Kingdom are increasingly open to seeking opportunities outside Europe in order to survive in a potentially zero-subsidy environment. On this level, the Middle East is highly attractive. North Africa is less so, due to regulatory ambiguities and stability concerns, but the potential is vast for anyone willing to take the risk,” Alic argues.
Posted by Peter Feuilherade at 10:10