The latest round of negotiations at the UN on drawing up an international arms trade treaty has ended on a positive note. 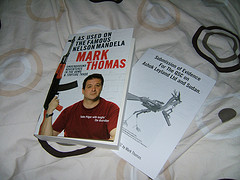 Mark Thomas book on the arms trade  (IMAGE – Richard Peat)
The five days of talks which ended in New York on 4 March 2011 focused on the scope and criteria of the proposed international treaty to control the arms trade: what weapons to include and what activities it should cover, such as imports, exports and trans-shipment.
READ THE FULL ARTICLE ON SUITE 101

Posted by Peter Feuilherade at 12:54